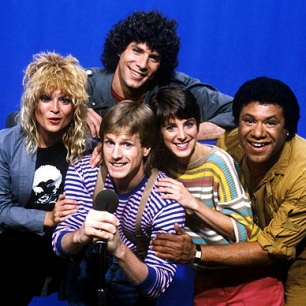 MTV just had its 30th birthday. It was this past Monday, August 1.

I heard about it first seeing a headline on Facebook. These days I get more and more news from FB - the "like" button for PBS, NPR, and many other news sources sending the headlines straight to my FB newsfeed. So, I expected to see tons and tons of FB entries about this pop culture milestone from music loving friends and my "like" sources. But surprisingly I saw very little to nothing. Maybe I was just busy that day and there was a lot on FB and I missed it? Maybe I just missed it because I haven't been watching tv (except for taped episodes of True Blood, Weeds and the Big C) and I don't regularly read the newspaper like I used to. Did you know about this? Did you hear a lot about it? What did you think?

This is the kind of thing that has made me stop and say WOW. And remember. 1981? 30 years old? Really? I was 14 that summer and I can still remember it SO clearly. I remember suddenly discovering it on tv. I remember those first videos. It was amazing. It changed everything. And the rest is history. Those of you younger than me who were not there to witness its very beginning - you. just. will. not. understand. Ever. Don't even try. And it doesn't count if you were 5. I was 14. A teenager. Right there. A teenager in a small town with no access to music other than the lame top 40 local stations and word of mouth. Before excessive cable tv, before the internet. Before college where one's music exposure could really blossom.

And as we all know, you were definitely around to see this, MTV later became CRAP. And it still is crap. It has been for a long time. I haven't dared to watch it in years. But at its start it was such a beautiful, wondrous thing. We would watch it for hours and hours. We would stay up all night at friends' houses watching endless loops of videos. It broadened our musical knowledge and tastes and brought a common musical knowledge and culture to a nation and then went global. It changed everything - some good and some bad - and music and culture would never be the same.
Posted by Wendy H at 2:41 PM