Sunset, as viewed from our great room inside the house we are building 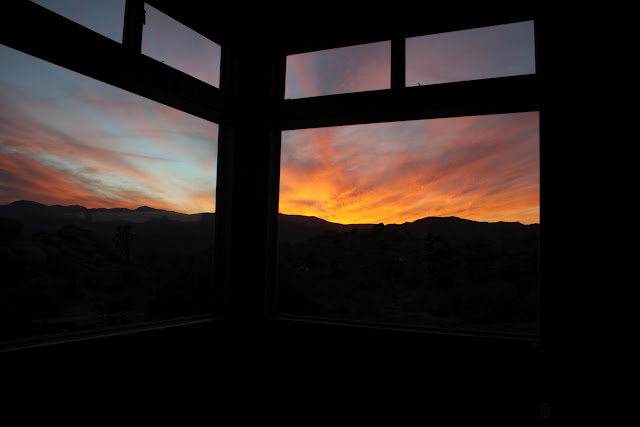 Tonight's sunset...the sky was on fire. 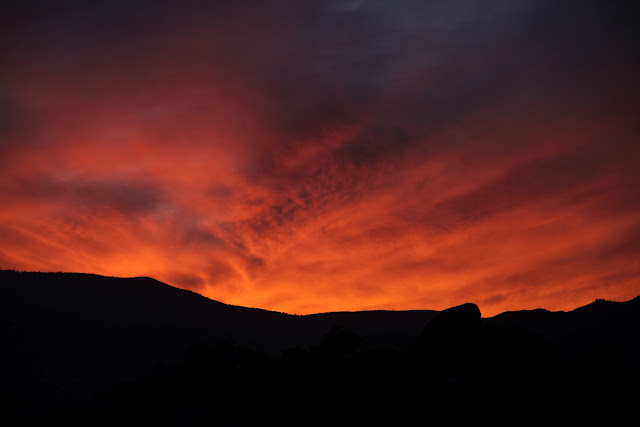 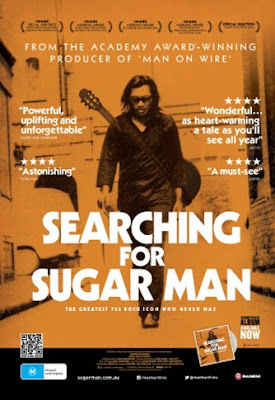 I have so much I want to say about this man Rodriguez, and the documentary film about his music and his story"Searching for Sugarman,"and the profound effect his story and his music have had on me. I've been wanting to write about him for a long time - ever since I first learned about him and his story earlier this year. His story just touched me. And it has stuck with me.

The film got a lot of play and press and great reviews from Sundance and many other global film festivals. I finally got the opportunity to see the film last Friday and I was not disappointed. I was even more fascinated and moved. The story is simple and beautiful and should be told. People should know about this artist and his story.

Mexican American, Detroit native, working-class background, folk rock songwriter, guitar player and singer. Sixto Rodriguez made two albums in the 1970s with Sussex Records - Cold Fact in 1970 and Coming from Reality in 1971 - and was viewed by some in the music industry as the next Bob Dylan. But his music never got played and he never achieved recognition, fame or fortune and he disappeared. Americans never learned of him or his music. However, in South Africa during the 1970s, 1980s and onward his music was bigger than Elvis and the Beatles. His music was popular among white, liberal, hippy South Africans who were increasingly unhappy with the apartheid police state they were living under and who connected with the politicized lyrics in some of Rodriguez's songs. But he was a mystery to his admirers in South Africa. They didn't realize that he was unknown in his home country, the US. There was no news or information about him, no more records, and only rumors about his dramatic death. This film is about the search for Rodriguez - to discover what happened to him.

Spoiler alert - if you haven't seen the film and are planning to see it, don't read any further than this paragraph. I already knew a lot of the story before I saw the film and it was still great, but I think if you don't know the details then seeing the movie will take on a whole new feeling and experience because there is a mystery there that unfolds through the film. GO SEE THIS FILM. GO LISTEN TO HIS MUSIC. 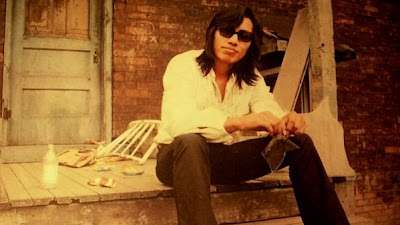 Rodriguez had such a great groovy, 70s look! Handsome and strong. Always in groovy shades and often with a hat covering his long beautiful hair. Add those looks to the voice, and the music and the words to his songs - very swoon-able. He wrote his own lyrics, and they are good. He speaks from a working-class background. The style is 1970s folk rock. You listen to it now and it is classic, beautiful. It holds up. Poetry.

I have bought both of his albums. If you like 70s folk rock you will probably enjoy them. I love both albums completely and listen to them often. I think his look and sound, as well as the story, are part of why his story makes me feel so emotional - some of it is tied up with nostalgia for that period of time - its music, its looks, its promises, what it represented and still represents to us today.


In the film some South Africans describe how in the 1970s you would find Rodriguez albums in the typical record collection at everyone's house, along side the likes of the Beatles and Bob Dylan. You can imagine how that could have been the same here in the US, but sadly it wasn't. We had to wait 40 years - FORTY YEARS!!!! - to hear this music. I find that shocking, but I guess I shouldn't as this is a typical story from the music industry. There are beautiful artists out there who just don't make it, for one reason or the other. I am grateful for the documentary film makers because without the film Searching for Sugar Man, and its popularity and publicity, we would most likely not know about this man and his music.

So let me get to the mystery. If you've seen the film or know the full story, you know that Rodriguez is alive. He did not kill himself on stage in dramatic fashion as many in South Africa believed. He is now 71 years old and he still lives in Detroit in an old run-down house, in an old run-down neighborhood. When his music career did not take off he returned to construction work, doing day labor and demolition work. He raised some beautiful, grounded daughters (you see them in the film). He had no idea he was bigger than Elvis and the Beatles in another place in the world, with fans and record sales. He did not get any money for those record sales by the way. In the late 1990s some South African guys who were obsessed with his music and his mystery finally located him in Detroit. They started a website and one of his daughters found the site and made the connection. They invited him to South Africa to perform a series of concerts in 1998.

When he travels to South Africa and performs, that was the part of the film where I was crying and trying to control myself to not sob out loud in the movie theater. Because it was so beautiful. They introduce you to him in the film and there he is, this humble man who has labored his life away in Detroit living a simple life like most people do. He hasn't dwelled on his dashed dreams of a music career. He is not bitter. He moved on and lived a simple, poor, hard-working life. In the film and interviews he doesn't say much about it. In the concert footage from South Africa - his first performance  in who knows how long - he walks out on stage and its like he just belongs there, not busting walls and carrying refrigerators out of broken down houses. And he looks like he loves it and he is happy and he just accepts it all with a shy smile and not a lot of talk. His peaceful nature and humility are beautiful.

This man finally getting his recognition is just this amazing, emotional thing to witness. He made something beautiful and he finally got his recognition. It is a beautiful and powerful gift that many will never receive. It is a very human story that we can all relate to and embrace. Thus the sobs while watching the film and the sobs that sometimes come up when I am listening to his music. The whole thing makes me raw and emotional. I still cry sometimes listening to his music and I cried writing this.

The film covers the period in the late 1990s when he toured in South Africa for the first time. It gives you a few hints of what has happened in his life since then and the public release of this film. It seems he has been doing some touring in South Africa and the UK, but pretty much still living a normal life in Detroit. The film has received a lot of attention over the past few months. He was on Letterman in August and he has been interviewed on CNN. He is now touring around the US. 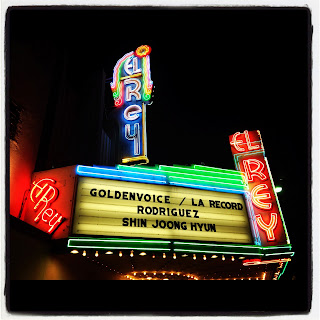 I got to see Rodriguez perform last week at a sold out show at the El Rey Theater in Los Angeles. (A fantastic venue by the way - I recommend seeing shows there). Our friend who scored the tickets described it perfectly - it felt like an honor to get to see this man perform. I was more excited to see him than most artists I've seen in my life because of his story. He is having a moment - his moment. And he deserves it. And I am so grateful and feel so blessed I got to experience his moment.

I would say the show was more of a fantastic experience than performance. He is a simple man who has been given this opportunity to let the world hear that beautiful music he made so long ago. And he did that. His voice is still good. He still can play the guitar even though he needed some help out on the stage and with some tuning issues. He seems to be enjoying himself. We got to be in a small venue with him and to hear his songs from his two albums, plus a few covers, surrounded by other people who love and admire him and get it. The show was to celebrate the 10-year anniversary of Light in the Attic Records, so it had some other really great artists who performed (I want to blog about the whole show later), but it was clear that everyone was there to see Rodriguez. All ages.  People came from near and far. There were South Africans in the audience displaying their flag. It was quite a love fest. He is 71 so who knows how much longer he will be out performing? All of us in that room were fortunate to get to experience him.

Reasons to love life in the high-desert...

...the glow as the early morning sun lights up the desert trees and plants

...the sound that raven wings make as they fly by and cut the silence

...the smell of the desert when it rains; more often only teasing with the scent and promise of moisture

...the dance of wildlife outside my window, ever changing, every day, always entertaining

...the clear, dark night skies, glittering with thousands of stars and draped in the Milky Way

...driving dirt roads, no cars or people in sight, windows down and kicking up the sand and desert dust 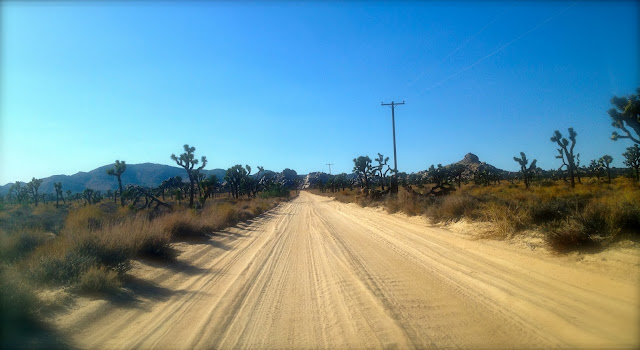