If you have the opportunity to drive across northern Nevada on Interstate 80 between Salt Lake City, UT and Reno, Nevada, I recommend making a stop to see The Thunder Mountain Monument.

Last month My Scenic Byway took us to Reno to see Elvis Costello in concert and we drove I-80 from Salt Lake to Reno. Approximately six hours west of Salt Lake, and two hours east of Reno, around the town of Imlay, we spotted something on the south side of the Interstate. It was like this weird, giant art project in the middle of nowhere. We had no idea what it was, but we had to check it out. 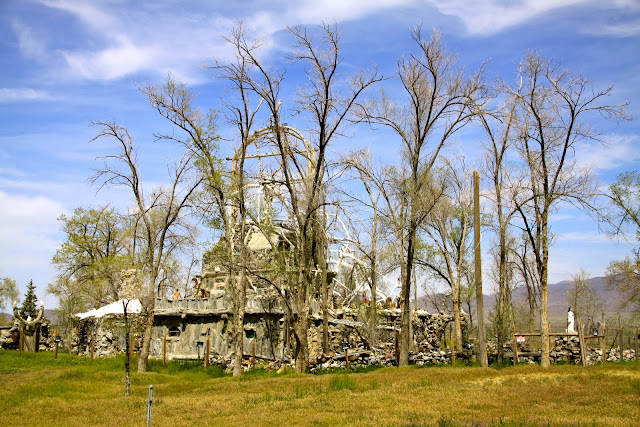 So, we took the next exit and turned back on a dirt road that ran parallel to 80 East and found ourselves at the site. There was one other car there - two women travelers who had stopped for a picnic lunch on their journey. When they left we were the only ones there. You walk through a gate and enter this very open but fenced 5- acre compound with the monument. The entrance is free, but there is a box for donations. There was no caretaker on site. The founder and father of this place was Frank Van Zant. He was born in 1921 in Oklahoma. At 14 he joined the Civilian Conservation Corps (CCC) and later served in the European theater of World War II. He had a passion for Native American history and culture and believed he was part Cherokee, changing his name to Chief Rolling Mountain Thunder. In 1968 he settled in the area where the monument resides and lived in a travel trailer. He started sculpting wet concrete into sculptures and into walls and buildings around the trailer. He attracted up to 40 followers at one time to join him on the compound, adding rooms around the trailer to create the large monument you see today. The Chief scavenged a 60-mile area around the monument, collecting trash and incorporating it into the main building's walls and its surrounding other buildings, old cars and sculptures. The art was on the outside - decorated walls, sculptures.This trash transformed into art and became the monument. He said "I am using the white mans' trash to build this Indian monument." 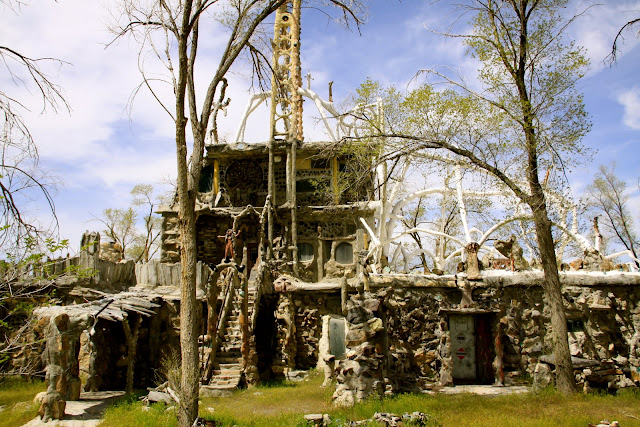 The height of the monument was the 1970s. By the 1980s, the followers had left and the Chief was running out of money. In 1989 his second wife and children moved away and an act of arson destroyed all the buildings except the monument. Sadly Chief Rolling Mountain Thunder shot and killed himself that year. Since the Chief's death, his son Dan has taken on the charge of caring for the monument. He comes once a month and has others look in on the place. He tries to raise money to keep the monument maintained. He struggles to protect the site from vandals. Over the years things have been stolen or damaged. When you visit the place you will see how remote it is and how easy it would be for this to happen. Which is a shame. Because a place as unique, intriguing and weirdly beautiful as this deserves to survive and to be seen by many.

Smithsonian Magazine wrote a good article about the story of Thunder Mountain. Read it here. You can also read more about the monument's history and construction from its official site at http://www.thundermountainmonument.com/.

The place has some really crazy, creative, creepy stuff. For more images from the monument see my earlier blog entry Stuff of Nightmares.
Posted by Wendy H at 12:30 AM