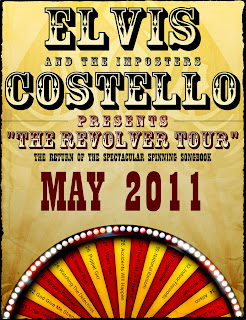 Last Saturday night, 7 May, the Byway took us to the Grand Sierra Theatre in Reno, Nevada to see the first night of the Elvis Costello & the Imposters' Revolver Tour - The Return of the Spectacular Spinning Songbook.

Elvis featured a similar spinning wheel for some concerts back in 1986. This wheel is huge and reminded me of the spinning wheel from Wheel of Fortune. The wheel has 40 song titles - hits, rarities and covers - and the play list is shaped by people coming on stage and spinning the wheel. I've got a photo of the wheel from the show below.

For once I moved quickly and also paid more than I normally would to get really great tickets. I bought second row center tickets. I refuse to tell my husband how much they cost. They were worth it. Maybe the best seats I've ever had for a show. And it was such a great show. See the photos below - sorry they are only bad iPhoto images with no flash. 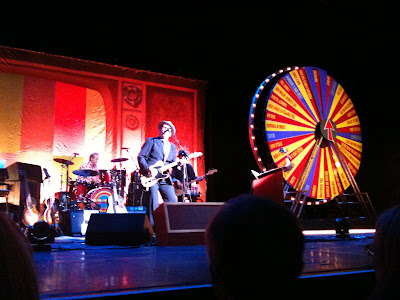 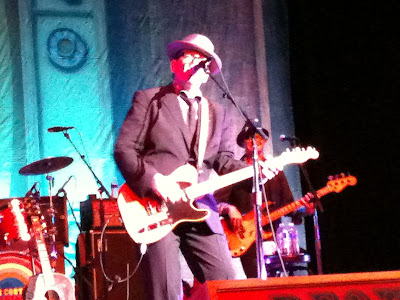 Elvis gave a really solid and entertaining performance. He was in good singing form. He was funny and fun - kind of an emcee walking around stage in between performances.  Along with his voice and his songwriting, I have always loved his look. He is still wearing a suit and the trademark hat and thick black frame glasses - a Buddy Holly doppelganger. The Imposters (3 guys on keyboards, drums and bass) were great. The stage settings were fun. The theater was really beautiful - a great place to see a show. I think it is an 1,800 seat venue - large with a large stage - the kind of place where no seat in the house is really a bad seat. It has curved banquet seating further back - the kind you would imagine for old Vegas and Reno type shows. I wanted to get called on stage to spin the wheel, but I didn't. Phooey! 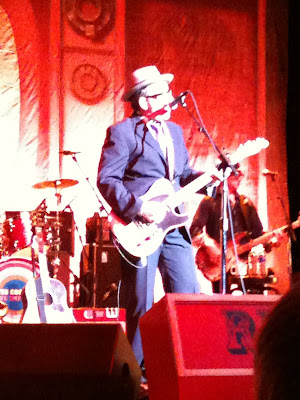 This was the fourth time I've seen Elvis. Every show has been really different and really, really good. I saw the When I was Cruel tour at Wolf Trap in VA, The River in Reverse with Allen Toussaint tour also at Wolftrap in VA, an acoustic tour with Bob Dylan (just Elvis seated on stage with a guitar singing - best show ever), and this Revolver Tour. The man has more than 30 recordings - solo, with the Imposters, with the Attractions, and with many others. He is a great song writer and singer. I prefer his more mellow music and I love the jazzy music he has done in recent years. I love the music he did with Burt Bacharach. I have about 22 recordings and would like to fill out the collection.
I thought the show was really great and a lot of fun. I just read a review of the Oakland show that sounded disappointed - their complaint being that when you allow the song list to be chosen by chance - the spin of the wheel - you may not end up with the best flow of songs. Sure that can happen, but I think we were lucky in Reno (ha!) and got a really great mix that was pretty balanced and had good flow. I found the play list from the Reno show:

Check out the very cool Elvis Costello official website to see more about the Wheel and Elvis' music. If you get a chance to see this tour, I would recommend it. He always puts on a good show. He has many tour dates coming up moving east (including another show at Wolftrap!) and then he goes to Europe later this year. Check out the tour dates on the website or the Elvis Costello Wiki page.
Posted by Wendy H at 7:07 AM