A few weeks ago on a road trip to Reno to see an Elvis Costello show, we stopped along the Byway to see Great Basin National Park. The park is located near Baker, Nevada, near the Utah border, just off of the Route 50 "Loneliest Road in America" stretch that crosses from Fallon to Delta. You must do this drive if you have the chance. It is amazing in its remoteness and beauty. 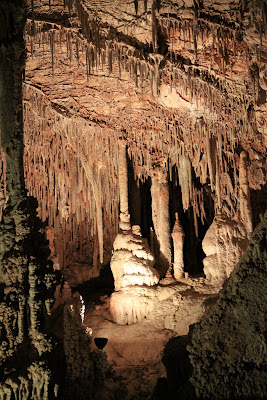 The Great Basin National Park has a lot of interesting things to experience. In the high desert, this park hosts 13,063 foot Wheeler Peak. It has 5,000 year old Bristlecone pine trees - some of the oldest trees in the world. That alone is a reason to go there. The area has some of the darkest night skies in the United States - high elevation, low humidity and very low light pollution means this is one of the best places for star gazing in America. It also has the Lehman Cave, which was the purpose of our visit on our fast drive by the park at the end of a long weekend visit to Nevada. We did not have time to stay longer, camp and really explore the park - that is for future visits.

This national park is named for the Great Basin which is the largest area of contiguous watersheds in North America. It is a 200,000 square mile hydrographic area that drains internally. All precipitation in this area evaporates, drains into the ground or into lakes. No water from this area reaches the ocean. It also contains the lowest elevation point in North America, Badwater Basin, and less than 100 miles away, the highest elevation point in the contiguous United States, Mount Whitney. The Great Basin encompasses Reno to the west and Salt Lake City to the east and extends south to close to Las Vegas and north into Oregon. It includes Lake Tahoe, America's largest Alpine Lake. Much of the geography of this region is desert and sparsely populated.

Lehman Cave was my first visit to a cave. All those years living in Pennsylvania, Virginia, Maryland and Washington, DC I never once visited Luray Caverns out in the Shenandoah area of Virginia. All my Byway travels I just never visited a cave. I think caves are fascinating, but they also freak me out a little. Being under ground, in tight spaces, in the dark - just not my thing. I am amazed at the feats of spelunkers and I am sure they see some incredible sites, but I don't think I will ever find myself doing that. But Lehman Cave, like Luray, is the kind of cave that has been set up for visitors to walk in on a guided tour. No crawling. Established walkways. Lights (except when they turn them off so you can see and feel the true darkness of the cave). Very safe. Very much not freaky. Especially if you have someone to cling to when they turn off the lights.

Lehman Cave was discovered in the late 1880s by Absalom Lehman (proudly from my home state of Pennsylvania). Lehman had a mining history from Australia but had settled in that area, Snake Valley, for cattle ranching. Soon after his discovery, Lehman was guiding 100s of visitors a year into the cave. After his death the land was sold and by 1912 it became protected as part of the Humboldt National Forest. Lehman Cave became a national monument in 1922 and was loosely managed by the US Forest Service. A couple who owned land in the area acted as custodians and oversaw continued work in the cave to clear pathways and guide visitors. For awhile they used one of the larger rooms as a site for meetings and parties, including weddings, dance parties and Boy Scout jamborees. In that room where they once held all of these events there is graffiti on the ceilings - over 100 years of people leaving their names. Being in that room it was fun to imagine all the people who had been there and the crazy things that must have happened down in that cave. Candle lit dance parties pretty deep into a cave? I would have loved to have been there. Over the years the National Park Service took greater control and continued to improve the site for visitors. Electricity came into the caves in the 1940s replacing the older candle lit tours.

The cave was amazing. I am so glad we took the tour. I can now say that I am not afraid of these kinds of caves and I look forward to seeing more in the future. This visit inspired me to go and see the new documentary Cave of Forgotten Dreams about the Chauvet caves in France.  If you have an interest in caves and ancient man, I recommend seeing the film.

I don't have other cave experiences to compare it to, but I am assuming that Lehman is much smaller and more mellow than a place like Luray. From all the signs I used to see on the Virginia roads advertising Luray, it just seems like a very touristy place. The Lehman Cave is not that known and is far more isolated as it sits in a national park that is off the beaten path. So, I feel this was probably a good first cave experience. I don't like to visit places that are super touristy with crowds of people. If you feel the same way, then this is a cave for you.

Here are some tips for visiting the Lehman Cave.