Fire is in the news a lot these days. And on my mind a lot too. This summer is giving us record breaking high temperatures, no rain, and a lot of really bad wild fires. Fires in Colorado and Arizona have been all over the news. Closer to home we had some smaller wild fires in Utah, including a big one that kicked up yesterday in the gorgeous Alpine Loop area of the Wasatch mountains near Sundance. I read this morning that a lot of Independence Day fireworks have been canceled, some due to the fire risks and concerns.

Just a few days ago, this past Saturday, we left Salt Lake City for our new Byway adventure and life here in the California desert. Paul drove the Penske truck and I drove my car. Heading south on I-15 in Utah the skies became cloudy and dark. Not the kind of cloudy and dark you see when a storm is brewing, but rather the kind of sky that you get from a lot of smoke or air pollution - in this case the culprit was wild fires off in the distance.

The skies were grey and everything else appeared grey as well. It was such a depressing sight. It was exactly like the skies you see in those apocalyptic movies where its the future and we've destroyed our environment and gangs of violent scavengers roam the lands fighting to survive. You know what I am talking about? I couldn't help but think about those films and the world they depict and what would life be like if everything was grey like this all the time. Climate change and all of these scary record high temperatures, along with the drought and the increased risk of wild fires - all of this is kind of scary in my book. All of us here and now are going to be ok, but a few generations ahead of us? Sorry. Those folks are screwed. I know, I know - people tend to be resilient and finally figure things out, so maybe it won't be that bad. I hope so. What do you think?

As we drove further south the skies finally cleared, but then, as we got just north of Scipio (yes, my favorite gas station petting zoo!), we saw a wild fire off in the distance. I have never seen anything like this before. I've never seen a wildfire up close. We couldn't see the flames as it was off in the distance and it seemed to be somewhat under control, but the smoke was unbelievable. Again the scenes looked apocalyptic. It was blowing my mind, so eventually I had to pull over to the side of the road and get my camera and take some shots.  Incredible sight, huh? Have you seen a wild fire up close? 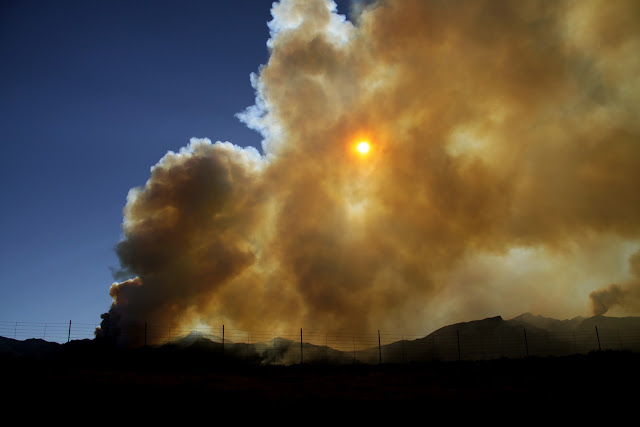 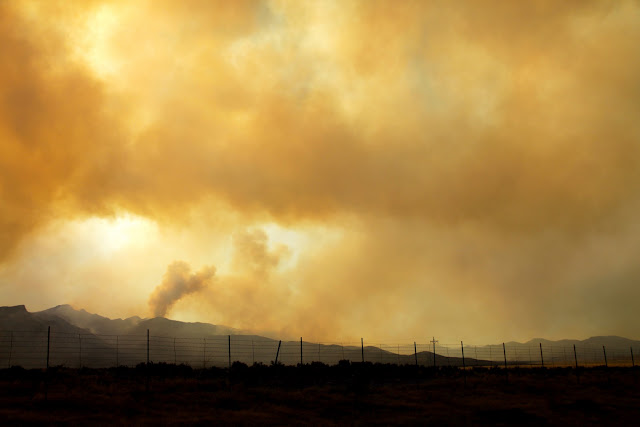 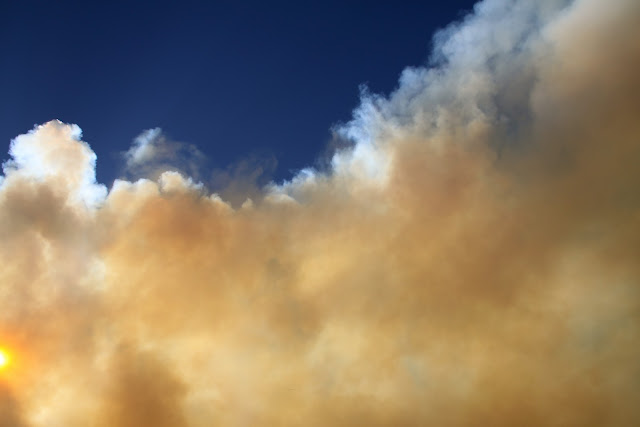 Growing up and living on the east coast, I never thought much about wild fires. They exist out east of course, but it isn't like what you have in the western wilderness areas. As a child I lived in a heavily wooded mountain area, but we never had any fires (thankfully). Since then I have always lived in more developed areas, so while there is always that fear of a house fire, its not the same as the fear of a wild fire. Living out in Utah at the edge of the Wasatch mountains, I could start to appreciate more the fear of wild fires. When you are living in heavily wooded areas, they can just sweep through and grow so strong and large that they become tough or impossible to contain.

But I really started thinking about wild fires when we started building our house down here in Pioneertown. This is a very dry area and even though its desert, there is a lot of plant life. The desert is blanketed with a huge number and variety of small plants, bushes and Joshua trees - ready made kindling to help a wild fire spread fast and furious. This area did suffer a really bad fire back in 2006. It destroyed the plants on a lot of land and took some houses and structures and one life. It just missed my husband's old cabin. You can still see the scorched Joshua trees where the fire tore through. The land is slowly rejuvenating - nature always does - but it takes some time.

When we started designing our house plans and building our house we started to become acquainted with all the fire protection requirements, some probably standard for most new construction, but some specific to this remote and fire prone area. I was a little shocked.

We will be living in an area full of desert plants, and of course, dry. If a fire starts out there, depending on the winds, which are around a lot, you can imagine how quickly it could spread. We are probably about 20 minutes (best guess?) from the closest fire station and its all rough, dirt roads which means you are constrained in how fast you can drive to our house, especially a big fire truck. As a result, we are required to install a sprinkler system in our house, and to have a separate water tank specifically for fire fighting. There are other requirements for all of our doors and windows and the materials we use for the outside of our house. All of this costs a lot of extra money, especially the sprinkler system. However, in spite of my initial sticker shock, I've come to realize that it will be worth it if it can help us protect us, our house and our belongings in the event of a fire.

I've never had to think so seriously about fire before now with building a house and building it in this environment. Fire can be so terrifying and so devastating. I think I will need to, and I want to, read up about fires and learn more about what to do in the event of such a wild fire or home fire (obviously we also need to be concerned that we don't start a house fire that would turn into a wild fire). We obviously have to think about a fire plan for our house. Where do we go for safety? How do we get out of the area? People get trapped in wild fire areas and die all the time, including fire fighters. It is a legitimate and serious concern.

Down the road from our property people sometimes go out and shoot guns against the butte. Its illegal, but people have been doing it for many years and there really aren't many folks out here to stop them. However, living so close, we will try to stop this, mainly because that type of shooting is one cause of wild fires. I am not against shooting or guns (I actually love shooting!), but it is far too risky to be shooting out in this dry area. The fire risk is too high.

If you've got any fire prevention or safety planning tips and experience, please share.
Posted by Wendy H at 11:58 AM