Building a Home as an Owner-Builder 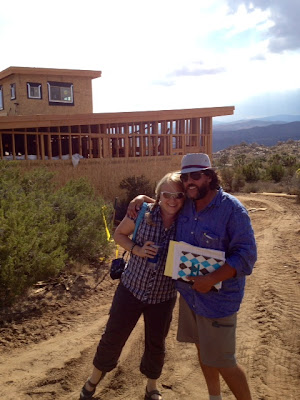 We are building a very unique house off-grid out in the California desert and I really love the way we are doing it. In home building terms we are doing this as an owner-builder. We already owned the land so we started with that big hurdle already crossed. We have a family member who is not an architect, but who has a lifetime experience building homes, who happened to live in the area, who happened to not have any other projects going on, and who happened to be making a life change that allowed him to take on leading and managing our project, and to reside temporarily up on our land to be right there at the construction site for convenience and security. Our wonderful families were able to step in and help us with financing the construction (when we are built we will secure a mortgage with a bank and pay them back). All the stars aligned.

We could afford hiring our family member to design our house - doing it all on our own, just the three of us. He did it old school. No computers and fancy software. He sat at a table and drew and drew and drew.

We worked on the house design and plans for many months last year. We started in the summer of 2011 and design work went on until January. Version after version, slowly morphing into what became our final design. We were still living in SLC until July so every month we would drive down here to the desert over a weekend and sit and meet with him in his little work room discussing the plans and making changes. When our design was final, he then drew all of the many plans you need to build a home  - elevation, electrical, plumbing, etc. - again all by hand. His skill is amazing. This is a man who never went to school for this, but he knows all of this from years and years and years of real life experience building homes. A true craftsman. When those plans went in for review (they have to be reviewed and signed off on by an official engineer before you get a building permit), they were in fantastic shape. A tweak here or there was all that was required.

We submitted our designs for permits in January. We broke ground in March. We poured the concrete slab in May. We moved here in July just after the framing started. Framing is almost done as is the plumbing. We are now designing our electrical plans. The roofing starts on Monday. Then windows and doors and drywalling inside and siding outside. We are about half way there and there is A LOT still remaining to do. We hope to move in by December. Fingers crossed.

My husband is managing the overall project - its a full time job and now that we are down here he spends every week day up there from early in the morning until late in the afternoon. Our family member noted above is managing the construction and our small work crew is composed of friends and friends of friends.

We were going to hire a company to do the framing and at the very last minute they started talking about how they weren't sure they would be able to do the work for the price and the costs would go up and they weren't sure how much, blah, blah. We said forget it and hired our own crew of individuals. So now we have this group of local guys, friends and long-time acquaintances doing the framing. Actually it has been a crew like this since the beginning. It is probably taking a little longer than it would to just hire some company to do it, but we feel really good about the work that is being done. The cost will be the same, maybe a little more, but part of that is us having to buy all the scaffolding and tools, which isn't such a bad thing because now we own all of that stuff and we can use it again. And the other great thing about this situation? We are providing some good, steady work to people we know and care about. This whole arrangement feels so good and so right. It really feels like we are keeping this building process in the community and sharing the wealth so to speak. If we are going to spend money, I like spending it locally and with good people.

In addition to the beauty of engaging good people to build the house, we get to be intimately involved in every aspect of the construction process. We are renting a house only minutes away from our land. My husband is at the construction site every day, involved in every decision. I do my work at home as a telecommuter, following an east coast schedule which means I work from 6 am to 2 pm. That allows me time to go up to the construction site in the afternoons to see the progress and participate in some things. Unlike buying an already existing house, we get to make the decisions on every square inch of the house inside and out.

Building a house is a huge investment, but in terms of cost it can be the same or less cost as buying an already existing house. We figure the way we are doing it this will cost us less than what we would spend to go out and buy a similar type of existing home and it is costing us about half of what it would cost to go the more formal route with new construction of hiring an architect, construction company, etc. We've done an early appraisal and the planned house is valued at about double of what we are building it for. Plus, we are going to have a unique house, designed by us, the way we want it.

I feel so blessed by our good fortune.