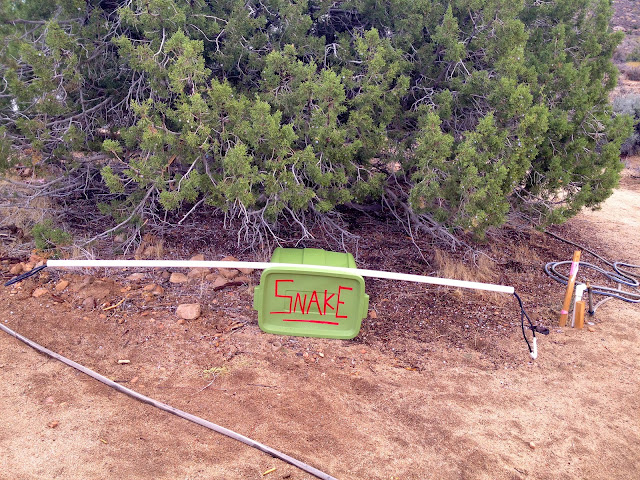 Some rattlesnakes have started coming around the construction site lately. So Paul created our very own rattle snake catcher. There it is on top of the bucket where you put the snakes after you catch them so you can drive them far away from your space (apparently they are territorial).  As I look at this photo I am thinking we might need a deeper bucket.

Rattlesnakes are our neighbors here. That is just the reality. You don't see them often, but they do come around now and then. About two weeks back we spotted a baby rattler one evening. I wasn't even paying attention (and I was wearing flip flops) and I walked right on past it without even seeing it. Thankfully he wasn't in attack mode. He didn't rattle until we tried to chase him away so we wouldn't run over him with our car as we were leaving the building site.  Then our friend spotted a different one the next day which got me worried that we might have a rattler family around the house.

When the little guy we saw finally moved out of the way and coiled himself up and started rattling to warn us, my adrenaline was racing. Its scary when they get upset like that. Plus I have learned that they do not necessarily have to be coiled up to attack. That is a myth. They may attack you from any position.

But they tell me that rattlesnakes aren't aggressive and tend to stay away and keep to themselves. Its the green mojaves you have to worry about. I knew there were rattlesnakes out here but I had never heard of a green mojave. You can survive a rattlesnake bite, but apparently you are at great risk if you get bit by a green mojave. Shit. Thankfully very few people claim to have seen them out here. I am hoping they just don't exist around where we live. Because apparently they are very aggressive. And they climb up in trees and bushes. And did I mention they are way more poisonous than a rattler?

Anyway, we have a lot of people working on the house right now and piles of wood and things around the construction site, so if we see them again, we need to remove them. The funny thing is we haven't seen them since, so either they are hiding (there are lots of places to hide near by) or they've moved on. I would prefer to find them and remove them as I tend to think they couldn't have moved that far away.

Pretty clever that Paul crafted that snake catcher himself. I knew what a snake catcher looks like, but where do you get one if you don't make it? Is there a place where you go to buy this thing? You need a long stick with a loop at the end that you can use to tighten around the snakes head or close enough to keep the head away from you. I've never been around to watch someone use one of these and catch one. I can just imagine how agitated the rattlesnake is going to be when you do this to him or her.

I've learned that the baby ones are the most dangerous. When I asked why, the answer I got was because they haven't yet learned how to deal with situations when they are confronted with animals or humans that might threaten them, thus they might attack more readily or use way more venom than they need for the size of the animal or human. Nice. I am on the look out. And remind me to do some research about what to do and where to go if you get bit.
Posted by Wendy H at 4:17 PM