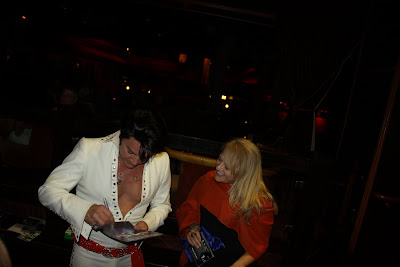 Elvis was my first love. He really was.

When I was a little girl I was very aware and very upset that I had missed my chance - I was too young to ever have a shot at being Elvis' girl. I am pretty sure I also realized that the Elvis I loved, the dashing young man from the silly movies I would eat up, was no longer around, having aged into the real Elvis that was still very much present in the pop culture of my childhood in the 1970s.

Still, I was heartbroken to know that he would never be mine, and heartbroken when he died. And to this day I love his music and I still think he was one of the hottest celebrities ever. The man was just pure handsome and pure sexy. Those of you who are younger than me may not get all of this. He was still a major force when I was young - still performing and very much a super star in spite of his weight and drug and alcohol problems. His movies were on TV all the time.

You have to appreciate his ability to generate global appeal and adoration and that this global appeal and adoration continue to this day - decades (34 years now) after his death. You know you are going to find Elvis songs on karaoke machines around the world - and crowds of people who know the words to the songs. You still see Elvis merchandise everywhere. I bet Graceland still pulls in the crowds (I have never been and it is on my list). Occasionally you can still catch his films (so deliciously bad) on TV and you can probably see them all on Netflix. Finally, you know you will continue to find Elvis impersonators - good and bad - around the world - performing shows and even weddings.

Elvis has always been synonymous with Vegas. He performed there at the Hilton Hotel in the late 1960s and into the 1970s (his last performance there was in 1976; he was scheduled to perform again in 1978, but he died in 1977). To this day you continue to have Elvis impersonator shows in Vegas and you even now have an Elvis-themed Cirque du Soleil show - Viva Elvis.

This past weekend some of my family met in Las Vegas to celebrate my mother's 70th birthday and we stayed at the Hilton. The Hilton is off the main strip and was at one time one of the big places to stay in Vegas. It is a very different experience than staying at one of the themed, newer places on the strip - an older, less crowded, more mellow crowd. We were delighted to discover that the Hilton hosts an Elvis impersonator show. We had to see it. 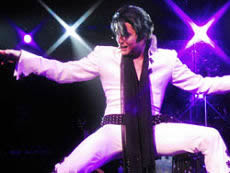 Trent Carlini - calling himself "The Dream King," has been impersonating Elvis Presley since the real Elvis' death. He was winner of ABC television's "The Next Best Thing." I never saw that show but understand it was about impersonators. He has been performing various Elvis shows in Vegas since the 1990s and now performs "The King" most nights at the Shimmer Cabaret Theater at the Hilton.

It is a small show, in a small, intimate cabaret scene - bar, cocktail service, small stage. It is the kind of show that gets better when you have a really great audience and the performer can feed off of and interact with the people. Unfortunately he did not have a great audience that night - present company excluded. When we walked in I was mortified to see such a small audience on a Saturday night. I felt very uncomfortable for him as a performer. What does it feel like to walk on stage and see hardly anyone in the audience? Deflating and energy sucking I am sure. And those that were there - most of them were pretty old and lacking in energy. Was our night a fluke? Or does this happen often? Perhaps he has been playing there too much and for too long?

I wondered if part of the problem is the time of the shows. The setting seems appropriate, but the shows are too early - one a night around 6:45. That seems too early for this type of cabaret show. Who wants to rush to this kind of show at that time? This show needs to be at 8 or 9 or 10 at night.

In spite of the sadness I felt about his small audience, he was a really great performer. He really looks like Elvis and he has a great singing voice and sounds like Elvis. He has it down. He is a fun performer. If you are an Elvis fan, you will appreciate it. Our small group of six did what we could to liven up the show with lots of clapping and cheering and moving around to the music. We had a great time and I would recommend the show. However, I should add that we had complimentary tickets from the hotel (thanks to my sister). The prices on the website note $37-$70. I would probably pay the lower end to see it, but not $70 because it is a very small show.

Regardless of the disappointing audience, he really looks and sounds like Elvis and is very entertaining. For an hour or so I could lose myself in that music from my childhood and fantasize that I was seeing the real Elvis - my first love. 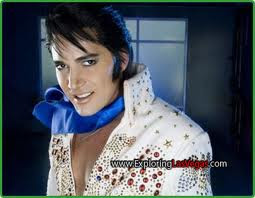