I love crazy people. I do. I am not talking about the scary, violent type of crazy. I am talking about people who are just a little odd, just a little off, just a little to the side of your normal, every day (and usually boring) person. People who live in alternative universes and aren't trapped like the rest of us by societal constraints. They aren't afraid to say or do things that would make most "normal" people blush.

Have you ever watched the show the Big C? It is on Showtime (which sadly I don't have any more - was sick and tired of paying so much money to Comcast) and just about to start its 3rd season. I watched the first two seasons and loved them. The show is about a woman who is diagnosed with cancer and it is about her coming to terms with this and her impending death, and her dealings with family and friends. It is mostly funny, but of course also beautiful, bittersweet, and gut wrenching. I know, I know you are probably saying "I don't need to watch a comedy about cancer." But trust me, it is worth watching. Anyway, this post is not about the show, its about the crazy. I mention it because there is this great character on the show, Sean Tolkey, played by the actor John Benjamin Hickey, who is the brother of the main character Cathy Jamison, played by Laura Linney. He is this fantastic crazy person on the show. Described as an "eccentric, homeless, anti-establishment environmentalist." I love this character and its refreshingly and frustratingly weird. Anyway, he is a good example of the kind of crazy I am talking about.

People who are just singing and dancing in the streets. For example, for those of you who live in the DC area, have you ever seen the guy who roller skates in the middle of the streets sometimes, often in very 70s looking roller skating clothes, with big headphones (obviously in his own musical world), spinning down the street in between rows of traffic? Is he still around? Love that kind of crazy.

People who stand on streets with very weird signs that talk about mind control and aliens and things of that nature (you can see a lot of that again in Washington, DC) or who drive around in cars, trucks or vans with hand made writing painted all over their vehicles, again trying to warn us about government mind control or the end of the world. Shouting it out to the world. Like this one we spotted yesterday on the scenic byway driving I-15 between Las Vegas and Baker, California (home of the world's tallest thermometer - a whole other area of crazy that I love - weird, Americana road side attractions). This man obviously has some good intentions - he wants to reach out to others and share his message. Its just that most "normal" folks wouldn't choose to do so by plastering their tractor trailer with giant words and pictures. But he certainly is getting his message out there, right? I for one love things like this. It makes the world a more exciting and interesting place. Crazy people make the world more fun. 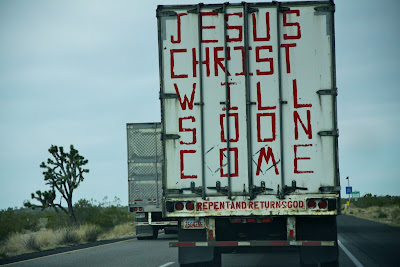 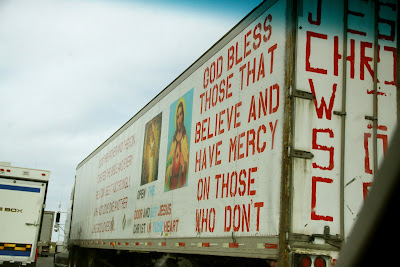 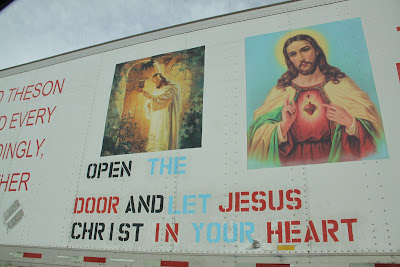 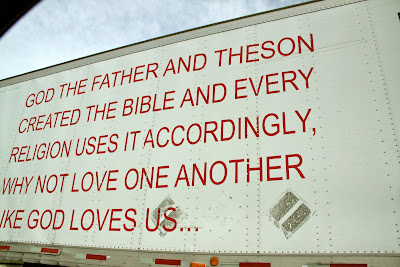