Sliding Liberia - A Story of War, Peace and Surfing 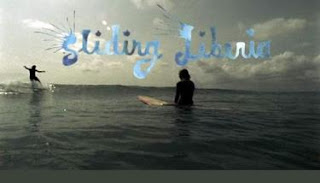 Most people know very little about Liberia, in spite of its long history and connections with the United States and the violent civil war that raged there for so many years. It has been in the news lately due to two Liberian women - President Ellen Johnson Sirleaf, the first woman President in Africa, and Leymah Gbowee, women's rights activist - sharing the 2011 Nobel Peace Prize. I've been fortunate to work there over the past two years and so I am always interested in learning more about the place.

I've been wanting to watch this documentary I'd heard about for years - Sliding Liberia - about surfing in Liberia. Sliding is a term some Liberians used to call the art of surfing. You can rent this film from Netflix. Written, produced and directed by Britton Caillouette and Nicholai Lidow, and released in 2008, the short film (48 minutes) follows American surfers Dan Malloy, Crystal Thornburg, and Chris Del Moro surfing in Liberia, interspersed with some history and interviews with Liberians. You meet Alfred Lomax who appears to maybe be the first real Liberian surfer there.

If you are a surfer or surfing admirer and/or interested in Liberia, you may find this film interesting. It is pretty light in my opinion and doesn't get very much into either subject, but it does give you a nice introductory feel of the country and people, with its film shots and interviews in Monrovia (the capital), Robertsport (the best place in Liberia for surfing), and the countryside. You don't find much out there about Liberia, so this film is a good addition. There are subtitles because while Liberians speak English, many speak with heavy accents that can be tough to follow for some listeners if you aren't familiar with it. Here is a trailer from the film.

Robertsport, about 50 km north of Monrovia along the coast, and only 10 miles from the border with Sierra Leone, is a getaway hotspot (in a country where getaway hotspots are few and far between) for expats and locals in Monrovia looking to get out of the city over the weekend or for holiday/vacation time. Don't let 50 km fool you. In a place like Liberia a 50 km drive like this one can take around 3 hours, so it is definitely more of a weekend place, not a day trip. For surfing, Robertsport is the place to go and Nana's Lodge is the place to stay. They have luxury tents and a restaurant and it is not cheap. Fortunately one can also camp on the beach for a lot less money, and many do.

What is cool is that surfing in Robertsport does appear to have continued, with some positive results in that Liberian young people have become interested in surfing and have learned the sport, and in that the local economy has received a little boost due to this surfing tourism. There was even a NYT Travel article back in 2010- On Liberia's Shore, Catching a New Wave - about surfing here!

There is a website called Surf Liberia that looks fairly up to date and gives you some information about surfing sites in both Robertsport and Monrovia. The film was done back in 2007/2008 and it is tough to get information on line about what really is happening these days with the surfing movement there. Most information I found was positive, but only reported up until around 2010. I found information about past surf competitions and surf workshops to teach local youth and surf scholarships to help Liberians get the equipment they need for the sport - all great stuff. But I can't tell what is still happening here in 2012. I know that some of the expats who were really supporting this work back in 2011 have left the country. I believe and hope that efforts were transferred to the local community. If anyone has some updates on this scene, I'd like to know.

I will be traveling out to Liberia soon for work so I will see what I can find in the way of some updates on the movement. I've never been able to get out to Robertsport to see it as when I am there I am always working and there is never enough time, but I'd like to try to make that happen on one of my future trips. Sounds like a good Scenic Byway adventure, doesn't it? Who wants to join me? Too bad I don't surf.