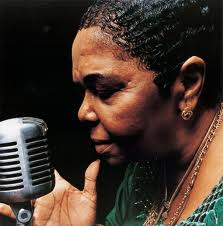 Still reeling from Christopher Hitchen's passing, I just learned that Cesaria Evora died today! I am so sad. I always loved her and her music. I suppose I should not be surprised as she was 70 and had suffered from heart problems. It has been many years since I saw her perform at Wolf Trap in the DC area and somehow I just assumed I might see her in concert again some day. Sometimes I just forget how time passes. However, I feel so fortunate to have known and loved her music and to see her perform live - twice!

Seeing her in concert was magical, especially outside on a warm summer night like I did. Her music was romantic - making you think of warm tropical nights near the ocean, feeling in love and free, dancing and drinking under the moon and stars.

She was from Cape Verde and much of her music was sung in Portuguese or a local Creole. I didn't understand the lyrics, but it did not matter. Her voice and the sound of the words and the melodies were beautiful. She performed a Cape Verde style of music called Morna. She did perform barefoot - thus the nickname - and occasionally she would sit at a little table and smoke, like she was in a cafe. I love a quote from Le Monde - "She belongs to the aristocracy of bar singers."

Her music was such a big part of me in the 1990s - the memories! I have many of her albums and used to listen to them all the time, but I haven't listened to her music for quite some time. New music comes along and we sometimes forget earlier artists and albums we loved. So in memory of a beautiful artist, tonight I am listening again to that music that I loved.

If you don't know her music, I recommend giving it a try. Cesaria (1995) and Miss Perfumado (1992) are probably still my favorites of all of her albums, probably because those were the first ones I knew. Below is a recording from YouTube of one of my favorite songs - just to give you a taste. I was going to put the original recording from the album, but I found this live performance and I love it! This is exactly how I remember her in concert. Enjoy the beauty that is the Barefoot Diva...