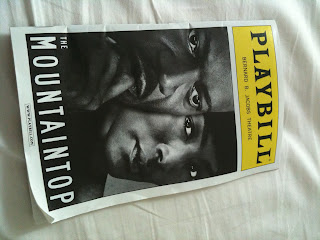 Last night we saw a play new to Broadway here called The Mountaintop. It is a two-person, 100-minute play with Samuel L. Jackson as Martin Luther King, Jr (MLK) and Angela Bassett as hotel maid Camae. The play is a reimagining of events the night before King was assassinated. It is April 3, 1968 and King retires to his hotel room (306) at the Lorraine Hotel in Memphis, Tennessee for the evening after delivering his famous Mountaintop speech to a large church congregation. A maid brings MLK coffee and they start up a conversation that runs through the night. I won't spoil it for you with any details, but I will say bring your tissues.

I was really blown away by this play and the actor's performances, especially Angela Bassett. I always knew she was good, but man oh man, she is such a beautiful, strong, brilliant actor. The story and the dialogue is intense, and I cried a lot - and was very unprepared with only one tissue.

The play has been running on Broadway at the Edward B. Jacobs Theater since September 22, but starts its official debut and run on October 13.

The play was written by 29-year old (!) Ms. Katori Hall whose inspiration for the play came from her mother who grew up near the Lorraine Hotel in Memphis and regretted not going to hear his "I've Been to the Mountaintop" speech in Memphis the day before he was killed. The play ran in the West End in London in 2010 and won the 2010 Olivier Award for Best Play (the British equivalent of the Tony).

Halle Berry was originally cast to play Camae in this Broadway version. No offense to Ms. Berry who I think is a good actor, but I am so glad the role went to Angela Bassett. I don't see how a Berry performance could have come close to the one from Bassett. This is Samuel L. Jackson's Broadway debut. Good for him. I went into it thinking that King is the main character. And he is, but I would have to say that Camae is a more strongly developed character, and while both Jackson and Bassett gave good performances, Bassett's performance is what I will remember.