Yet another reason why I like Salt Lake City. On September 24 this little place broke the Guinness World Record for the largest gathering of people wearing only underwear. They did this with the Utah Undie Run where 2,270 people gathered downtown in their underwear and ran 5 miles. The idea was to have fun, break a record, and in part protest against Utah being so conservative.

They broke the previous record from June 2010 that had a measly 547 people in Weston-on-Trent, Derbyshire, UK. For some photos from the run, check out this link.

Don't despair if you missed it. There will be an opportunity to break the record again next year with the Utah Undie Run 2012 to be held on August 25. That's plenty of time to get into "underwear in public" shape... 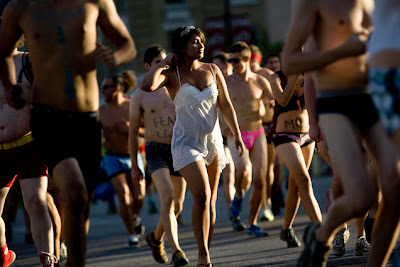