Today my mother reminded me that it was a year ago today that my grandfather (her father), who we called Pop, or Pop-Pop when we were little kids, fell down the stairs in his house, resulting in his death a few days later.  He was still living alone in his house, as he desired, but it was getting very tough to let him continue to do that. He was really good up until about 100 but after that his mind started deteriorating, pretty rapidly that last year of his life. Heck he was driving his car until 100, but then our family had to take it away from him. His father, my great-grandfather, also lived beyond 100. I remember celebrating his 100th birthday when I was a little girl. They were both very kind and loving men. My grandfather, as well as my grandmother, were very, very important people in my life.

This photo was from his 102nd birthday in 2009, a few months prior to his passing. I need to scan one of his younger photos and post it. He was a handsome young man. I miss him. 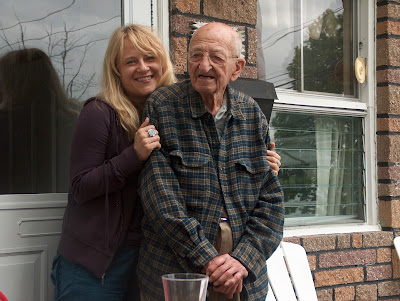