Holi Spanish Fork Batman! Meet me at the Lotus Temple...

I am so excited! Guess what I get to do at the end of this month? Celebrate Holi at a Hari Krishna temple in Spanish Fork, Utah! Some of you are probably saying...what?? Holi? Hari Krishnas? Spanish Fork Utah? What?
Let me explain.
Holi is a Spring religious festival celebrated by Hindus. Holi is celebrated at the end of winter on the last full moon day of the February/March lunar period. This year Holi falls on March 19 and 20, but it will be celebrated on March 26 and 27 here in Utah. It is a huge holiday in India and other places with large Hindu populations. If you want the historical/religious explanation of the holiday, please click on the link above.
So, what is so exciting about Holi, especially if you aren't a Hindu? Well, the main day of the festival, Holi, is celebrated by people throwing colored powder and colored water at each other. Yes. It is a giant mob of people dousing each other in pinks and yellows and blues and greens. A giant free for all where the crowd ends up looking like a big bunch of easter eggs. Who doesn't want an opportunity to be a part of something like that? Here is a video, from the celebration in Spanish Fork, to give you an idea.

Awesome huh? That video, from 2009, reports that 15,000 people attended that Holi celebration. 15,000! When I was working in India, I saw some Holi revelers but I never saw a crowd this size doing it. I can't wait.
Celebrating Holi in Utah you ask? Is there such a large Indian population in Utah? Well, actually there are some Indians and Nepalese around. We have two Nepalese restaurants here. I was wondering why anyone from Nepal would choose SLC as the place to live in the US when my husband pointed out to me that this mountainous region probably feels familiar to people who lived near the Himalayas...duh...I should have figured that one out on my own. I bet you did not know that one of the famous Nepalese sherpas - Apa Sherpa - lives out here. Last year he broke his own record, climbing Everest for the 20th time. That is some serious crazy stuff. He has done all of his climbs since 1989. This last trip he did to collect garbage on the mountain.
But that crowd of 15,000+ celebrating Holi in Spanish Fork probably has very few people from South Asia. I believe that most of the crowd who comes to this event is made up of a bunch of white, Mormon and other, but probably not Hindu, college kids from nearby Brigham Young University (34,000 students) in Provo, University of Utah (30,819 students) in Salt Lake City, and Utah Valley University (26,676 students) in Orem. It seems that the Holi Festival of Colors has become a huge college tradition around here. But how and why did this start here? 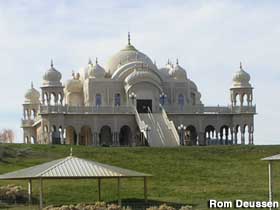 Well, small (population 31,000+), rural Spanish Fork, Utah, in the Orem/Provo metropolitan area, just happens to be the home of the Sri Sri Radha Krishna temple (translation: beautiful god and his queen). This temple was completed in 2002, modeled after the Kusum Sarovar temple in India. This Lotus Temple happens to be the first Krishna temple built in the United States. The grounds have a beautiful temple with a 9-foot green marble lotus flower, gardens with a lake and waterfalls, a dining hall to feed residents and visitors in typical Hari Krishna style, a store with items from India, a llama farm, and a radio station. They offer daily tours of the temple and grounds, they offer spiritual retreats and they organize festivals for holidays such as Holi, Diwali and others. To learn more about the Krishnas in Utah, the Lotus Temple, and the annual Holi Festival of Colors activities, click here.
Wow I cannot wait to see this place and experience this event. If you are in the area, come join us: Saturday, March 26 from 10-8 and Sunday, March 27 from 12-4. Admission is free.
Posted by Wendy H at 10:42 AM