If she was yours...I am so sorry

I wish I could find you. The owner of the big, beautiful white dog that I found on Route 38 (Pearblossom Highway) in an area called Little Rock, California. I found her in the left most lane of Pearblossom Highway heading east, right at 75th Street E. It was around 3 pm on Sunday. It was pouring rain so hard that it was difficult to drive. I am not from your area and was only passing through from visiting friends in Santa Clarita back to Barstow, CA and then on to Salt Lake City.

I was so sad to see her there in the middle of the road. I could tell she had only recently been hit. Then as I was driving by. I saw her chest move up as if she was taking a breath. That freaked me out because there were still cars coming and I was terrified that she would keep getting hit by cars. If there was a chance to save her, I wanted to do this. I was so angry that no other cars were stopping. I knew I could not drive on if there was a chance she was alive. I pulled my car over. I was freaking out and panicked over what to do. It was raining so hard and there were so many cars. I got out of my car and tried to keep more cars from running her over. I want you to know that I don't know how long she had been there, but at least I managed to keep more from running over her while I was there.

Finally I was able to get into the road. Her damages were probably all internal, as on the outside I could only see some blood on her foot. I am sorry to say that she looked gone. Beyond recovery. I saw her chest move one more time. But her body was not moving and her eyes seemed gone. I want you to know that she was not laying there suffering while I was there. I believe she was already gone or just passing and I was just seeing those last movements that the body makes involuntarily even after death. I want you to know that I was with her when she took her last breaths. She was not alone.

I picked her up - she was very heavy - and carried her to the side of the road and laid her in some grass.  I checked again to see if she could still be alive, but I do not think so. I did the only thing I could think of. I called the police. They were closed. I called 911. They connected me to the animal rescue people. I gave them the address - told them I did not think she was still alive, but could someone please come and get her. Not being from that area I had no idea where to take her or what to do. They told me not to wait as they weren't sure how long it would take to get there. So I stroked your dog's head one last time and told her to go in peace. I took this photo of her. Not to be morbid. I thought it might be needed for the police or animal rescue people or to help identify her. I also wanted to remember her. She was so beautiful, even in death. Like a big, white wolf. A beautiful animal. That whole thing seemed so raw and crazy and unreal that when I was back in the car driving I wondered if it had really happened or if I had dreamed the whole thing. I had to look at the photo to ensure it had really happened.

I mourned for your dog. I cried for her all the way to Utah. Sometimes I cried in anger over all of those cars and seeing none of them stop. It made me very angry at people and their stupid cars and their stupid carelessness and then their stupid disconnection from other people's problems. Sometimes I just cried because the death of an animal like that is just wrong. Sometimes because I knew someone had lost their pet. Sometimes because I wish I could have arrived at the scene earlier and possibly saved her. The animal people called me later to tell me they had sent an officer to the location and they could not find her. I was devastated to hear this. I know she did not get up and walk away. So someone must have stopped and picked her up. Was it you? Were you out looking for her and you found her? I hope so. So much. I am going to choose to believe this. Maybe you will find this blog entry on the internet and then you will know what happened. Maybe it will give you just a tiny bit of comfort. I want to know that she had good people who loved her and who would go out looking for her. I want to know that she was reunited with you, even if it had to be like this. Because she needed a proper passing. Which is why I could not leave her in the middle of that road to be run over again and again by horrible people who could not take the time to stop. If that was my dog I would want someone to do the same. And after this experience, I will always do the same.

I am still a wreck over the death of your dog. I have been crying writing this. But I felt that I had to write this to try to cleanse myself of her death, your loss, my experience. Seeing her, carrying her, being too late to save her. I am crushed. I am an animal lover and I can't stand to see an animal suffering. I can't stand to see people lose their pets. I am probably even more emotional right now because I am losing my cat of 15 years. I am grateful that I will have the time to say goodbye to him and send him off in comfort, in his home and with his people. I am so sorry that your pet's passing could not be the same. But please take just a tiny bit of comfort that someone who cared about her was there with her when she passed. I was there. And I cared a lot. 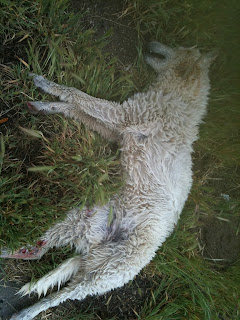