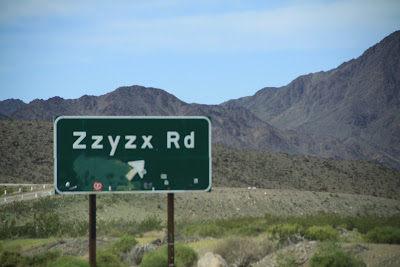 You pass this sign on Route 15 in the Mojave Desert, near Baker, California, approximately 100 miles southwest of Las Vegas. This sign leads to the former site of the ZZyzx Mineral Springs and Health Spa, now closed and now the site of the Desert Studies Center, a field station of California State University.
The name ZZyzx was given to the area in 1944 by Curtis Howe Springer. He pronounced it as "zy-zicks" and claimed it was the last word in the English language. He established the ZZyzx Mineral Springs and Health Spa on this federal land, bottling water for travelers through the desert. In 1974 he was arrested for misuse of the land and for violation of food and drug laws. California State University took it over in 1976, establishing its Desert Studies Center.