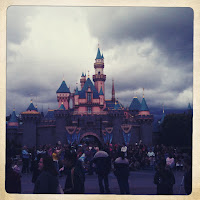 This past Friday I finally made my first visit to Disneyland in Anaheim, California. My husband decided that as part of my surprise birthday trip to the LA area, he should throw in a day at Disneyland. Great idea. I think everyone should have a Disney experience at least once in their life. I was excited to see and experience the place.

Growing up on the east coast I did go to Disney World in Orlando, Florida - once as a child and once in my 20s as part of a work conference held on the giant Disney property (a very different experience than when I was a child). I remember loving it as a kid, of course, but not so much when I went there in my 20s. My memory of it is that the whole Disney World complex is so huge and developed that I did not like it. It was overwhelming. There is so much stuff crammed all together in that weird area that wasn't a natural built environment, but rather an entire planned area. It felt strange and alien and just way too crowded. Sure Epcot Center and Disney World had some cool things, but I really would not want to return to that Florida nightmare.

I had never seen Disneyland before, and now that I have seen both, in spite of being cut from the same cloth, I have to say that to me they feel very, very different. While I would not want to visit Disney World again, even if I had kids, I would gladly go to Disneyland again, as an adult with friends or to take kids. Maybe I just had a uniquely positive experience during my visit and it is not always as great - I would have to see the place again to figure that out. And I do plan to go again. Because one day, as those of you who have visited know, is never enough for a place like Disneyland. You need more than that to see the sights.

Why did I like Disneyland so much? It is the original Disney experience - dreamt, designed and built by Walt Disney, in the 1950s. Unlike all the others that came later. And it feels that way. Unlike my experience of Disney World, Disneyland felt original, nostalgic, manageable. It is smaller than Disney World which I think is a good thing. It feels more natural (can I say that about a theme park??) as it sits in Anaheim, in the middle of a city, unlike Disney World which feels like an isolated fake world.

First impressions are usually important and I had a great first impression. The park was not crowded, the weather was agreeable (cloudy and threatening of rain, but dry most of the day with great temperatures), and we were with friends who are Disney fans and members of the exclusive Disney Club 33. I am going to write another blog entry about this Club 33 which I had never heard of until meeting Paul's friends and which I find fascinating, so be on the look out for it. Having visited the park hundreds of times, if not more, these friends knew the park and the history and were able to give us a unique experience that included information about things we were seeing, express entry into rides (no lines!), and dinner at Club 33. It was like having our own personal Disney tour guide. Being members of Club 33 (there are only 400+ members, there is a 14 year wait list to become a member (our friend waited 10 years to get his membership) and they are no longer accepting applications at this time) they can go to the park anytime they want, they can dine at the members only Club 33 restaurant on the Disney property, they get invited to other exclusive Disney events, and they get fast passes and other types of passes that allow them to skip the lines for rides.

One of these friends explained to me that coming to Disneyland is like going to the mall for them. They don't live far away and they pop in all the time. Sometimes they go to ride rides, sometimes they go just to walk around and people watch or look at the flowers, sometimes they just go for a meal. When you don't have to pay the $100 entry fee (yeow!) each time, who wouldn't do that if given the opportunity? And being able to visit the park so often takes off the pressure of a one time visit and allows you to take in little pieces at a time and enjoy it more. If you lived in the area I could understand getting a season pass for that reason. The season pass would be a good deal if you were going more than 4 or 5 times.

Like Disney World, Disneyland has other attractions adjacent to the main park. Right next door is Disney California Adventure Park, also referred to as "DCA" by those who frequent the parks. As the name suggests, the rides and attractions are California related. As we only had one day, we focused on Disneyland, but we did briefly visit the park. We rode one of the coolest rides I've ever experienced - Soarin Over California - a simulated hang-glider ride over California. You are suspended in the air over an 80 foot domed film screen with gorgeous shots of california cities and natural landscapes. You feel like you are hang-gliding. You move around, there are gusts of wind and you have scents - the smell of the ocean as you fly over the Pacific, the smell of oranges as you fly over orange groves and the smell of pine as you fly over giant forests. This ride was truly amazing and I would like to do it again.

The is also a downtown Disney district with many good restaurants and stores. There is a nice hotel in that district called the Grand Californian Hotel & Spa, which looked like a fun place to stay, but with rooms starting at $400+ a night, we did not stay there. There are plenty of other more affordable hotels right around the park. We stayed at the Ramada Inn Maingate, just across the street from the entrance to both parks. It was a typical hotel like that, with a great rate and you can't beat the location.

I recommend Disneyland over Disney World no hesitation. If you are planning to take yourself or your kids to one of these, choose Disneyland. I also recommend going to Disneyland as an adult, with other adults. It can be a very fun trip if you are with the right people and if you like walking around looking at the sites, great people watching, a ton of good eating options, and of course, the rides. Trust me, Space Mountain is just as awesome in your 40s as it was when you were 10.
Posted by Wendy H at 4:02 PM