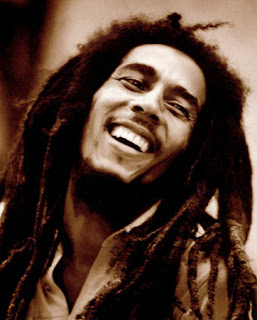 He would have been 66. Still quite young and capable if you consider all those musicians still out there touring and creating new music. But sadly he had to die in 1981 at the very young age of 36.

I was too young (14) to really know about him and his music when he died. I knew some of it, but I wasn't old enough or in the right geographic location (middle of nowhere, rural Pennsylvania) to ever know about concerts or have local radio stations that actually played his music. I really became aware of his music during college in the late 80s and beyond. I was always sad that I never got to see him perform. Can't you just imagine what it would have been like to see him live in the 70s?? It would have been amazing! With friends we used to joke around about him returning from the dead to give the greatest concert ever. Yes, I would pay a lot of money to see that.

I like a lot of reggae music, but none of it really holds a candle to Bob Marley in my opinion. It just doesn't. I love everything Bob Marley has ever done. I like all albums, all songs. I can listen to it for a very long time and not grow tired of it. I love the really old ska stuff from the 1960s all the way up to the overplayed classics.

I have this funny memory related to his music. In college in the 80s I was really into the anti-apartheid movement. I was obsessed with African history and politics and the revolutions of the 60s and 70s and with the struggle for freedom in South Africa. I was an African Studies major so I was living it pretty much all the time. I got involved in our college's efforts to divest from South Africa (and we were successful). I helped lead a boycott to remove Coke from our campus as they were a large investor in South Africa (and that got me quite a bit of flack and hate mail from other students), I supported other boycott movements. I participated in anti-apartheid conferences and protests. I loved Nelson and Winnie Mandela. I had fantasies of running away and joining Umkhonto we Sizwe undercover. No one would expect the young innocent white girl would they? Yes, yes. Go ahead and laugh. I sure do now. It is funny to look back and reflect how naive and crazy we are when we are young. Anyway, I met a South African guy at one of the conferences, a student from neighboring Amherst College, and we started dating. He was handsome and smart and nice. Attending one really bad party at Amherst one night, we were slow dancing and on comes Bob Marley's Redemption Song. He starts telling me stories about what it was like growing up mixed race in Capetown under apartheid. All of this, stories of the struggle - my passion, going on with Bob playing in the background! I remember swooning - I was that much in love with him at that moment. Young romanticism. It is a silly, but beautiful thing.

I often wonder what would have happened if Bob Marley hadn't died so young. Would he have continued to make beautiful music? What would have happened to him and his life? The beauty of dying  young and unexpected like that is that you often leave while still fresh and on top. I think of examples like John F. Kennedy. Or James Dean and Marilyn Monroe. Or Jim Morrison. Musicians who die young avoid the possible future of turning out crap music and being forgotten.

How sad is it that he was so young and virile and creative and then cancer caught him in his mid 30s. How sad is it that heading home to Jamaica to die he could not make it and had to die in Miami. Supposedly his last words before he died, uttered to his son Ziggy? "Money can't buy life."

So true, Bob. So true. Happy birthday. Thanks for all the years of happiness and sweet memories your music has brought to my life, and many others I know.
Posted by Wendy H at 8:12 AM