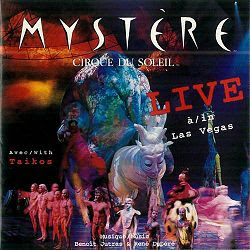 In addition to gambling and other naughty behavior, Vegas is about shows. Lots and lots of performances. All kinds. On the byway here in Vegas last night I saw my very first Cirque du Soleil (CdS) show. My first! I remember when CdS used to travel and have shows in big tents - back in the 90s. Remember that? They used to come to Washington DC where I lived, but I never really wanted to see the shows. Back then I was poking fun at it (do you recall the very old South Park episode totally dissing CdS?). I had friends who saw some of the shows and raved about them, but I guess it was the circus element of it that didn't interest me at the time. I am not a big fan of circuses (see my post about clowns), although I liked them as kids - for the animals only. However, as the years have passed and I have heard more and more rave reviews from friends, it was time for me to finally experience this phenomenon.

For those of you living in a cave, Cirque du Soleil is a Canadian entertainment company founded in 1984 by street performers. The performances are circus like and incorporate music, dance, acrobatics, gymnastics, elaborate sets and costumes. The company has taken a hold of Vegas and there are now seven (!) different shows based there full time: Mystere, O, Zumanity, Ka, Love (Beatles), Chriss Angel Believe, Viva Elvis - and other shows that travel. The show we saw is Mystere - the first and oldest show to be based in Vegas. Mystere started showing at the Treasure Island Hotel and Casino in 1993. Wow it only took me 17 years to see it! To give you an idea of the scale of this operation, Mystere runs two nights a week, two shows each night, with room for an audience of 1600 people. And I believe the shows are typically sold out. And the tickets are not cheap. And its been running for 17 years! The other ones are newer, so they haven't had as long a run. But still, multiply that by 7, give or take. Quite a business! Quite a lot of entertainment. Think about how many people visit Las Vegas every year. Think about how many of them see one or more CdS shows while visiting. One reference says that 9 million people have seen Mystere alone. NINE MILLION. That is crazy! And I am now part of that 9 million. Are you?? What did you think?

Overall I liked it. I could do without some of the silly comedy clearly aimed at family viewers with young kids, but the acrobatics are very impressive and make up for the schmaltz. I don't see how anyone could resist being impressed by the strength, flexibility, balance and moves of these performers. I can't stop thinking about how strong and in shape these performers need to be to carry out this show. I don't think I've seen that much defined cut muscle ever. This is definitely a show for families with kids and anyone who is interested in gymnastics and acrobatics. There is not a storyline to follow. Just pure performance.

It was a good introduction to CdS. I've been told the other shows are more adult. We are going to see "O"at the Bellagio in a few days. This is the show they do in water. O - eau - water. Can't wait.

Have you seen any Cirque du Soleil? What did you think?