Downtown Salt Lake sits in a valley, in a bowl, surrounded by mountains. Unfortunately, what happens is that air, and air pollution, can get trapped down in that bowl, and sit like a layer of smog over the city, until some strong winds can come in and blow it out.

The fact that Salt Lake has one of the worst air qualities in the US, is one of the few things that bother me about being out here. In the summer I could look out and see the smog layer across the city below me, but we did not experience too much of this air pollution as we live outside of the main city and at a higher altitude. I have been here since May of last year and for the most part the weather has been fantastic all the time. We had a cool summer. The winter hasn't been that cold - certainly not as bitter as what I experienced on the east coast all my life. We have had quite a lot of snow, but it is always beautiful, powdery snow that turns the landscape into a winter wonderland and then melts away quickly in the sun. We don't have this ice and slush of the east coast. We haven't had much rain, but enough for it  to be good. It is sunny a lot of the time and the sky is blue, either with no clouds in the sky, or with insanely beautiful cloud patterns that change all day long. See? Wonderful weather. Until last week.

We returned to Salt Lake a week ago tomorrow, after a week on the road in Nevada and California. We returned to grey skies that seemed endless. Not just the kind of grey skies that come with inclement weather. These were the grey skies of inversion. A giant cloud sat over Salt Lake and it reached up into our altitude as well. We have not seen the sun for a week! I was told that if we drove further up the canyons to Park City or one of the ski areas, we would come out of the fog layer and see all blue skies. Apparently the weather was gorgeous for skiing, but alas, I was not skiing. I was sitting in my house and working, in the land of grey.

We drove down into the city and it was like driving in a fog bank. Visibility was terrible. You couldn't see your world around you, only what was in front of you. Downtown itself was less foggy, but it was all grey. It was such a weird thing to see and experience.

I am not a meteorologist, but I can try to say a little about what is Inversion from what I've read (thank you Wikipedia!). Inversion is a "deviation from the normal change of an atmospheric property with altitude." Usually the air near the surface of the Earth is warmer than the air above it, because the atmosphere is heated below from solar radiation warming the Earth's surface. Sometimes the normal temperature situation is inverted so that the air is colder near the surface of the Earth than above. With humidity in the cooler layer, fog appears. Thus inversion. Inversion can lead to air pollution being trapped close to the ground and can act as a cap, particularly if you have areas closely surrounded by hills and mountains, like Salt Lake, that trap and cap the air over the city. Salt Lake City is not alone. Inversion is common in places with similar topography - like Los Angeles, Mexico City, Mumbai, Prague, Vancouver, Oslo, Sao Paulo, Santiago, London and Boise. I experienced something similar in Kathmandu, Nepal as well.

I am happy to report that we had snow last night and woke up to a beautiful, powdery layer of about 4 inches in our yard, covering the trees like a winter wonderland, and even better, this snow seems to have broken the inversion layer. The sky is blue. I can see the mountains in the distance. I can see the sun rising and melting the snow off the branches of the trees, causing snow dust to fall and sparkle in the sunlight. It is a beautiful, beautiful day. 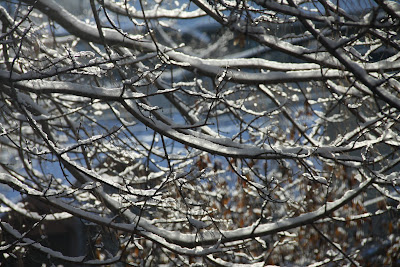