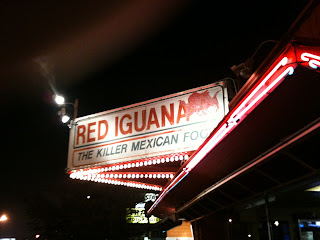 I need to write more about Utah! If I could just stay put here for awhile instead of traveling everywhere. Here is something I learned about living in Salt Lake City. If you are visiting Salt Lake and you want some good Mexican food, try the Red Iguana. "Killer Mexican Food" since 1985.

Last night I ate there for the second time since arriving in Salt Lake City last May. I went months ago and have been wanting to return. We decided to show the place to my parents who have been visiting for the holidays as an excuse to finally return.

When I moved to Salt Lake I was delighted to discover that there is a lot of Mexican food in the area. One expects more of this cuisine out here in the West, but I tend to think of that being further south in Arizona and New Mexico and southern California, not so much up here in Utah. But it is here. And that makes me very, very happy.

Lots of people told me the Red Iguana is good, and I agree. My impressions from two visits: Not fancy. It is in a kind of run down area west of downtown Salt Lake. It is affordable, with a giant menu and a whole lot of mole (7 kinds). It is small and comfortable with a kitschy decor (diner like) and a very friendly wait staff. It is always crowded, often with a line out the door as you can't make reservations. The crowd is diverse, cool and interesting. I like the restaurant's energy and the crowd. I like being there. I've only tried a few different menu items so far (chicken enchiladas, vegetarian chimichanga, chile verde), so I can't speak to most of the giant menu. The food I have had has been good. I wouldn't say it is the best Mexican I have ever had, but it was good and I would go again and will go again many, many times. If you visit me I will take you here.

Red Iguana was voted Number 1 Restaurant at Urban Spoon. It has received a number of "best restaurant" awards from various Salt Lake reviews. It is so popular that they opened a second location (Red Iguana #2) nearby the original location about a year ago, and a third take-away location in the City Center Food Court. The restaurant has been featured on the Food Network's Diners, Drive-ins and Dives. A review in Salt Lake's City Weekly provides a better review than I am going to attempt to write. Check it out here if you want a second opinion. I am going to take their advice and order the red pipian mole next time. 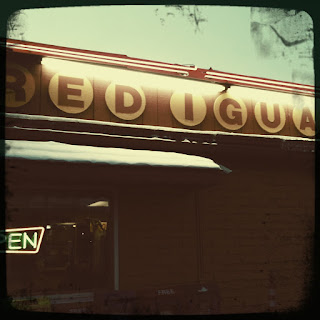