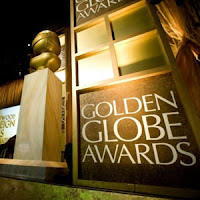 Do you like to watch award shows? I used to watch them all the time, and then I started missing them because I traveled a lot and didn't pay much attention to the schedule. I do think it is fun to watch them, especially if you are at home and relaxing or doing things around the house with the show on in the background. It is fun to look at the stars and guess who will win.

I missed some parts when the flight crew would interrupt with updates - of course they would never interrupt during the commercials, only right when they would be announcing an award. We also missed the end because we landed. We planned to watch what we missed when we got home, but sadly our recording was bumped by some conflicting recordings. I was able to read about the final results on line and the show is airing again on Tuesday on some station so we plan to watch that to catch what we missed. If you missed the show, check the schedule for Tuesday.

Anyway, this is what I got from watching the Golden Globe show. What did you get from it?